A monocular is a modified refracting telescope used to magnify the images of distant objects by passing light through a series of lenses and usually prisms, the application of prisms resulting in a lightweight, compact telescope（such as our  Monocular binoculars 20X50）. Volume and weight are less than half those of binoculars of similar optical properties, making it easy to carry, and also proportionally less expensive. Monoculars produce 2-dimensional images, while binoculars add perception of depth (3 dimensions), assuming one has normal binocular vision.
Monoculars are ideally suited to those with vision in only one eye, or where compactness and low weight are important (e.g. hiking). However, monoculars are sometimes preferred where difficulties occur using both eyes through binoculars because of significant eye variation or poor vision in one eye.
A monocular with a straight optical path is relatively long; prisms are normally used to fold the optical path to make an instrument which is much shorter. Visually impaired people may use monocular to see objects at distances at which people with normal vision do not have difficulty, e.g., to read text on achalkboard or projection screen. Applications for viewing more distant objects include natural history, hunting, marine and military(such as our Monocular binoculars 8X42). Compact monocularare also used in art galleries and museums to obtain a closer view of exhibits.
When high magnification, a bright image, and good resolution of distant images are required, a relatively larger instrument is preferred (i.e. a telescope), often mounted on a tripod. A smaller pocket-sized "pocket scope" (i.e. a typical monocular) can be used for less stringent applications. These comments are quantified below.
Whereas there is a huge range of binoculars on the world market, monoculars are less widely available and with a limited choice in the top quality bracket, with some traditionally very high quality optical manufacturers not offering monoculars at all.[1] Today, most monoculars are manufactured in Japan, China, Russia and Germany, with China offering more product variety than most. 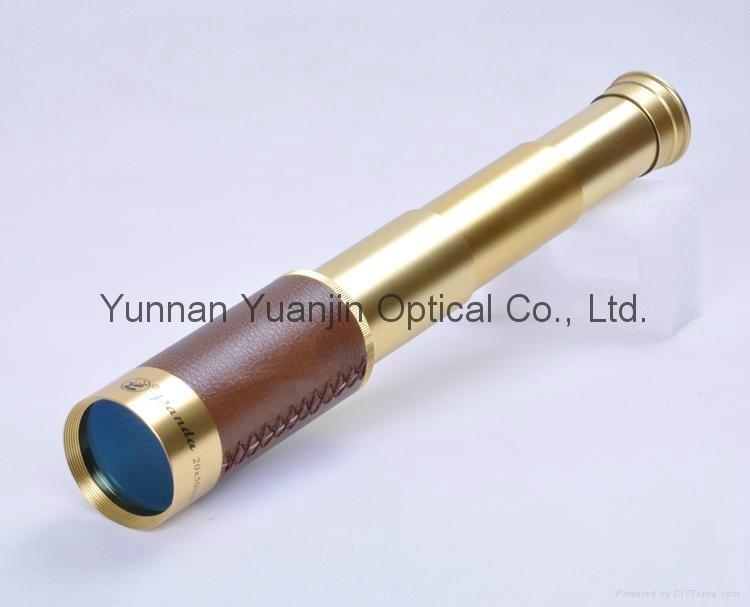